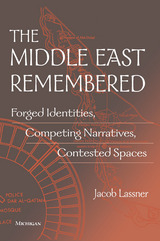 The Middle East Remembered: Forged Identities, Competing Narratives, Contested Spaces
by Jacob Lassner
University of Michigan Press, 2000
Cloth: 978-0-472-11083-4
The Middle East Remembered is the latest work from one of the most productive of Near Eastern historians, Jacob Lassner. The essays and studies that make up this book seek to provide a deep explanation for traditional Muslim and Jewish reactions to events past and present. The volume is in many senses a meditation on the art of history-writing in four crucial eras of the Near East: the founding years of the Muslim community, the generation after the Abbasid overthrow of the early Caliphate, the events leading to collapse of Caliphal governance, and the end of traditional historiographical models on the edge of modernity.
In the first of the book's three parts, Lassner examines what he calls the stratigraphy of the text--he makes sense of the unusual organization of medieval Islamic narrative. The second section investigates issues such as work on city planning and on the creation of imperial centers. The last portion studies the interplay between Jewish and Muslim memory and the trading of themes and ideas between the cultures.
Shorter studies in the volume have been revised, and the author weaves new and complementary essays around them. Earlier work has been transformed and made more available to the general public. The style is accessible, and technical and arcane usages have been kept to a minimum. Throughout there are flashes of the author's wry humor.
Jacob Lassner is Philip M. and Ethel Klutsnick Professor of Jewish Civilization, Northwestern University, and Professor of Middle East History, Tel Aviv University.
REQUEST ACCESSIBLE FILE