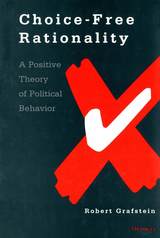 Rational choice theory has become the basis for much of the recent work done in political science. Yet explanations of many political phenomena elude rational choice theorists. Robert Grafstein offers a modification to rational choice theory that extends its ability to explain social behavior.
Grafstein argues that, instead of basing the analysis on the assumption that an actor will maximise her expected utility or her utility given the probability that the event will happen, we should define rationality as the maximisation of expected utility conditional on the probability that her act will bring the event about. This definition of utility, based on the work of Richard Jeffrey, restores the consequences of an individual's act to rational choice analysis. For example, in making a decision to vote, a conditional expected utility maximiser will compare the likelihood of victory for her preferred candidate given her own participation with the likelihood of a victory given her abstention.
The author shows the theoretical implications of this new definition of rationality and then uses it to explain certain aspects of ethnic identity and mobilization, ideology, and altruism and intertemporal choice. He then explores the implications of this idea for policy analysis and econometrics. This book will provoke a debate about how work based in rational choice theories is done.
Robert Grafstein is Professor of Political Science, University of Georgia.
TABLE OF CONTENTS
Contents
List of Figures
Preface
Introduction
1. Rational Choice Inside Out
2. Group Identity
3. Ideology
4. Selves and Self-Interest
5. Political Causes
6. Reduced Expectations
Appendix A: Supplement to Chapter 2
Appendix B: Supplement to Chapter 3
Notes
References
Index
REQUEST ACCESSIBLE FILE