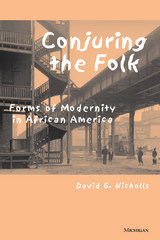 Conjuring the Folk: Forms of Modernity in African America
by David G. Nicholls
University of Michigan Press, 2000
Cloth: 978-0-472-11034-6
Conjuring the Folk addresses the dynamic relation between metropolitan artistic culture and its popular referents during the Harlem Renaissance period. From Jean Toomer's conclusion that "the Negro of the folk-song has all but passed away" to Zora Neale Hurston's discovery of "a rich field for folk-lore" in a Florida lumber camp, Harlem Renaissance writers made competing claims about the vitality of the African-American "folk." These competing claims, David Nicholls explains, form the basis of a discordant conversation on the question of modernity in African America.
In a series of revisionary readings, Nicholls studies how the "folk" is shaped by the ideology of form. He examines the presence of a spectral "folk" in Toomer's modernist pastiche, Cane. He explores how Hurston presents folklore as a contemporary language of resistance in her ethnography, Mules and Men. In Claude McKay's naturalistic romance, Banana Bottom, Nicholls discovers the figuration of an alternative modernity in the heroine's recovery of her lost "folk" identity. He unearths the individualist ethos of Booker T. Washington in two novels by George Wylie Henderson. And he reveals how Richard Wright's photo-documentary history, 12 Million BlackVoices, places the "folk" in a Marxian narrative of modernization toward class-consciousness.
A provocative rereading of the cultural politics of the Harlem Renaissance, Conjuring the Folk offers a new way of understanding literary responses to migration, modernization, and the concept of the "folk" itself.
David G. Nicholls is a post-doctoral fellow in the Center for the Study of Race, Politics, and Culture, University of Chicago.
REQUEST ACCESSIBLE FILE