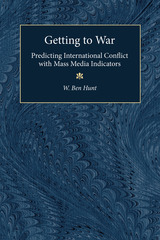 This book shows how to predict wars. More specifically, it tells us how to anticipate in a timely fashion the scope and extent of interstate conflict. By focusing on how all governments--democratic or not--seek to secure public support before undertaking risky moves such as starting a war, Getting to War provides a methodology for identifying a regime's intention to launch a conflict well in advance of the actual initiation.
The goal here is the identification of leading indicators of war. Getting to War develops such a leading political indicator by a systematic examination of the ways in which governments influence domestic and international information flows. Regardless of the relative openness of the media system in question, we can accurately gauge the underlying intentions of those governments by a systematic analysis of opinion-leading articles in the mass media. This analysis allows us to predict both the likelihood of conflict and what form of conflict--military or diplomatic/economic--will occur.
Theoretically, this book builds on a forty-year-old insight by Karl Deutsch--that all governments seek to mobilize public opinion through mass media and that careful analysis of such domestic media activity could provide an "early warning network" of international conflict. By showing how to tap the link between conflict initiation and public support, this book provides both a useful tool for understanding crisis behavior as well as new theoretical insights on how domestic politics help drive foreign policy.
Getting to War will be of interest to political scientists who study international disputes and national security as well as social scientists interested in media studies and political communication. General readers with an interest in military or diplomatic history--particularly U.S. history--will find that Getting to War provides an entirely new perspective on how to understand wars and international crises.
W. Ben Hunt is Assistant Professor of Politics, New York University
REVIEWS
"Although esoteric and complex in some arguments and presentation, Hunt's book is a good read."
—Richard Sobel, Harvard University, American Political Science Review, December 1999
— Richard Sobel, Harvard University, American Political Science Review