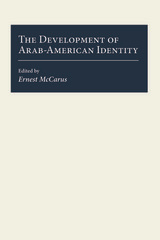 The Development of Arab-American Identity
edited by Ernest McCarus
University of Michigan Press, 1994
Cloth: 978-0-472-10439-0
What do Arab-Americans think of traditional American values? How do they perceive their treatment as new immigrants? Have they been seriously alienated from the dominant culture? The Development of Arab-American Identity offers an account of the Arab-American experience from the early immigration to the present day. After the historical background has been set, the essays in this book deal with the struggle for religious, political, cultural, and social identity, all of which involve coping with unconscious and conscious stereotyping and marginalization of Arabs and Arab-Americans.
REQUEST ACCESSIBLE FILE