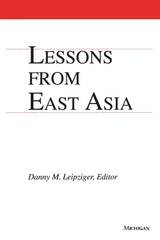 This compilation of case studies and cross-country essays focuses on the role of public policy in the experience of East Asian economies. A major theme running through the volume is regional learning and regional contagion--the spread of that learning. Beginning with the model and experience of Japan and continuing with the impressive achievements of countries originally considered unviable in the 1950s and 1960s, like Korea and Taiwan, contributors demonstrate how regional policy lessons permeated borders easily. The 1980s brought further lessons and flows of capital to the second generation of rapid industrializers. And the 1990s have seen regional contagion benefit new aspirants like Vietnam. As the chapters cumulatively reveal, however, the transferability of lessons depends on the institutional framework in which policy is formulated, the consistency of policy, and the quality of implementation.
Part 1 includes the case studies for the first generation of rapidly developing East Asian economics--the tigers--while Part 2 incorporates the later generation success stories--the cubs--plus the Philippines, a country only now beginning to show significant progress. Part 3 includes cross-country essays on public investment, foreign direct investment, and cross-country patterns that synthesize the lessons learned and propose actions for other development aspirants to pursue.
The essays aim to fill two major gaps--the paucity of country-specific work on the institutional side of development policy and the failure to explain the mixed record of industrial policies in East Asia. The volume will appeal to students, scholars, and policymakers in development economics.
Danny M. Leipziger is Lead Economist, Latin America Region, World Bank.
This title was formally part of the Studies in International Trade Policy Series, now called Studies in International Economics.
REQUEST ACCESSIBLE FILE