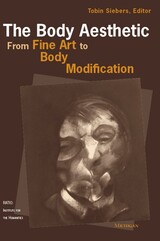 The last thirty years of cultural theory have seen a vigorous analytic focus on the human body both as the subject of cultural representations and as an escape from their repressive influence. Rare is the account that focuses on the most obvious fact about the body: it is the stuff out of which human beings are made.
Generously and variously illustrated, this volume gathers together the work of literary critics and artists, classicists, art historians, and specialists on the history of the body, who survey the strangeness and variety with which the body has given human beings form. Richard Leppert traces how the representation of little girls responds directly to the cultural anxieties of modernity. René Girard plots how starvation becomes an art form, while Eric Gans surveys the contemporary phenomenon of body modification. Sander Gilman explores aesthetic surgery as a response to human unhappiness. Simon Goldhill discovers in the Roman empire the initial stirrings of institutions that focus on the spectacle of the body, and Cynthia S. Greig provides a glimpse of what the history of photography would look like if male nudes replaced female ones. Marion Jackson details how the different physical existence of the Inuit guides the way they make art. Joseph Grigely transforms aesthetics as usual by focusing on the disabled body, while Tobin Siebers describes the traumatic appeal in both fine art and the media of wounded flesh, whether human or animal.
The Body Aesthetic is a broad exercise in cultural studies and will address a variety of readers, from those interested in detailed, theoretical accounts of the body, to those interested in belles lettres, to those interested in fine art.
Tobin Siebers is Professor of English, University of Michigan.
REQUEST ACCESSIBLE FILE