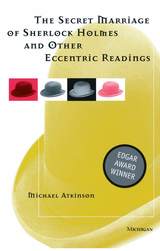 The Secret Marriage of Sherlock Holmes is about reading, a process that we take for granted. But Sherlock Holmes, the cultural icon to whose exploits Michael Atkinson gives new readings, became famous by taking nothing for granted. Holmes's adventures can be read in new ways, including ways that he himself would have found startling, but which can give contemporary readers satisfaction. In clear, accessible prose that will engage specialists and lay readers alike, Atkinson engages in "a series of flirtations" with nine of Arthur Conan Doyle's favorite detective fictions, using the tools of modern literary theory, from depth psychology to deconstruction. Bluebeard, the kundalini serpent, and Conan Doyle's mother pop up alongside Jung, Nietzsche, and Derrida as guides to new understandings of these classic stories. Just as Holmes uses treatises on tobacco ash and tattoos to give fresh readings to puzzling facts, Atkinson employs widely different critical strategies to unravel the mysteries of reading itself.
"What a delightful book! This is surely the most interesting writing you will ever read about Sherlock Holmes, but it is much more. Michael Atkinson gives us literary criticism at its best: the sheer fun of watching a bold and imaginative reader breathe into well-loved, but well-worn, fictions new and enchanting life. Atkinson's mind races as nimbly as Holmes's own, and he makes the stories our hansom cab through human nature itself. A tour de force!"
---Norman N. Holland, author of Murder in a Dephi Seminar
"A book that speaks directly to readers. . . Atkinson sees far beneath the surface of the Sherlock stories to provide fascinating commentary."
---Cincinnati Post
"Atkinson demonstrates a love and knowledge of the Holmes stories. . . I would recommend The Secret Marriage of Sherlock Holmes enthusiastically to any lover of the Canon who is prepared to have their perceptions widened."
---Mystery Writers of America
Michael Atkinson is Professor of English and Comparative Literature, University of Cincinnati.
TABLE OF CONTENTS
Contents
Introduction
CHAPTER ONE "The Red-Headed League: READING HOLMES WITH A HOLMESIAN EYE
CHAPTER TWO THE SUBTLE SERPENT IN 'The Adventure of the Speckled Band"
CHAPTER THREE 'A Scandal in Bohemia*: VIRGINITY PRESERVED AND THE SECRET MARRIAGE OF SHERLOCK HOLMES (WITH A CODA ON POE'S 'The Purloined Letter")
CHAPTER FOUR PSYCHOLOGIZING THE TEXT OF A Study in Scarlet: REPRESSION AND THE TEXTUAL UNCONSCIOUS
CHAPTER FIVE SMALL CHANGE: MONEY AND TRANSFORMATION IN 'The Man with the Twisted Lip"
CHAPTER SIX SHERLOCK HOLMES AND THE EMPIRICAL IMAGINATION 'A Case of Identity"
CHAPTER SEVEN A SEARCH FOR TRUTH AND THE ELUSIVE WOMAN IN 'The Adventure of the Copper Beeches"
CHAPTER EIGHT STAGING THE DISAPPEARANCE OF SHERLOCK HOLMES THE AESTHETICS OF ABSENCE IN "The Final Problem"
CHAPTER NINE ENVOI: THE ICONOCLASTIC DETECTIVE: OVERREADING "The Adventure of the Six Napoleons"
Critical Appendix
Notes
Works Cited
REQUEST ACCESSIBLE FILE