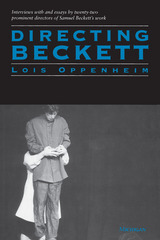 In Directing Beckett, Lois Oppenheim presents interviews and essays with twenty-two prominent international directors of Samuel Beckett's work, many of whom worked closely with Beckett, assisting him with his productions or acting under his direction before directing his work themselves. Here they speak openly of their experiences of working with him, and comment on various productions that, in taking great liberties with his work, have raised a number of fascinating legal and aesthetic questions.
In exploring this key figure in the history of theater, Oppenheim's interviews--with such directors as JoAnne Akalaitis, Edward Albee, Herbert Blau, Joseph Chaikin, and Carey Perloff--also address many of the complexities of the director's role, such as the meaning of directorial integrity and fidelity to the playwright's vision--an issue of particular relevance to a playwright whose exactitude, with respect to stage directions, is well documented. Additional highlights include photographs from many of the productions; the unpublished text of a lecture by the late Alan Schneider, Beckett's most accomplished American director; and an interview with the late Roger Blin, the very first director of Beckett's work.
"Directing Beckett is a rare thing--a book both pleasant to read and useful to have . . . it is like listening to the ideal panel, everyone who should be there there and all at their articulate best." --Toby Silverman Zinman, Theatre Journal
"Anyone intending to direct or act in a work by Beckett, or to write about his work, must read this book." --Choice
Lois Oppenheim is Professor of French, Montclair State University
REQUEST ACCESSIBLE FILE