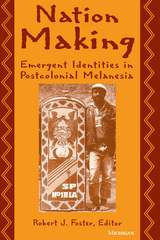 In this theoretically sophisticated volume, contributors examine the process of nation making in Fiji, Papua New Guinea, the Solomon Islands, and Vanuatu- states that attained formal political independence between 1970 and 1980. The remarkable cultural diversity within these states demands close ethnographic study of different groups and their contesting definitions of nationhood and leads to highly original approaches.

The essays explore the political conditions and cultural assumptions that inform how Melanesians variously imagine a national community. The authors interpret a wide range of materials, from political speeches and official ceremonies of state to newspaper advertisements and life crisis rites. They demonstrate both how the legacies of divisive colonial rule, the weakness of the postcolonial state, and the exigencies of capitalist markets undermine the processes of nation making in contemporary Melanesia and how new forms of popular and consumer culture potentially shape an emergent national consciousness.

Comparative and historical in its orientation, this book will appeal to readers not only in anthropology but in political science, social history, and cultural studies. It will be of special value to those interested in comparative politics and history, Pacific studies, ethnicity and nationalism, and colonial and postcolonial studies.