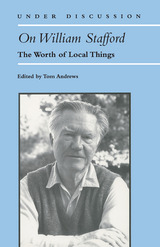 "[His] poems . . . bear witness to both the care and disregard around us--naming the places, catching the shine of the ordinary, pulling the rug out from under vanity and pretension, giving fresh credit to the selfless and decent, acknowledging the inevitable, nudging us toward observant lives and peaceful interactions."--Jurors, Western Book Awards Lifetime Achievement in Poetry, 1992
The late William Stafford's poetry and essays have had a major influence on contemporary American poetry. Since his book Traveling Through the Dark won the National Book Award in 1963, his awards have grown exponentially as new work has appeared. The range of writers in the past four decades who have celebrated Stafford's work-- from Margaret Atwood to James Dickey-- is remarkable. On William Stafford: The Worth of Local Things helps clarify the precise nature of Stafford's influence by assembling the responses of some of our best poets and critics to his work, including Richard Hugo, Charles Simic, Louis Simpson, Robert Coles, Linda Pastan, and Robert Creeley. This collection offers a unique view of Stafford's sometimes controversial work and insight into several of the liveliest recent debates in poetics.
Tom Andrews is Assistant Professor of English, Ohio University.
REQUEST ACCESSIBLE FILE