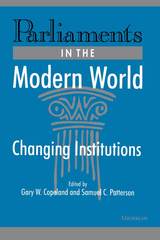 Parliaments in the Modern World presents the case that these legislative bodies – long characterized as institutionalized and therefore static – are in fact changing at a surprising rate. Whether the changes are subtle (as in the United Kingdom) or responding to fundamental constitutional rearrangements (as in Italy and Germany), even the casual observer no longer views parliaments as regular or predictable. Focusing on the parliaments of Great Britain, Germany, Italy, Scandinavia, Turkey, and Central and Eastern Europe, contributors to this volume try to understand how, when, and why parliaments modify themselves.

The editors frame the book in the theoretical questions of how institutionalized bodies accomplish change. They explain the nature of the institutionalizing process and show that as the ability for an organization to fulfill its mission changes (or as the mission itself changes), corresponding adaptation becomes necessary if the institution is to remain viable. The individual case studies amply illustrate how modifications in the governing ideology, the party, the electoral systems, or the character of membership have precipitated change at various times and in various parliaments. Parliaments in the Modern World ultimately demonstrates that it is precisely this ability to change that has kept these organizations vital, responsive, and long-lived.
REQUEST ACCESSIBLE FILE