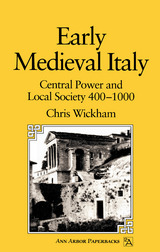 Early Medieval Italy: Central Power and Local Society 400-1000
by Chris Wickham
University of Michigan Press, 1989
Paper: 978-0-472-08099-1
This book presents a picture of the history of Italy between 400 and 1000, probably the six centuries least known in all Italian history. Early medieval Italy was the victim of many invasions and had a long succession of different Germanic rulers: Ostrogoths, Lombards, Franks, Germans, as well as the provincial administrations of the various Byzantine enclaves in Italy. Despite this, the structures of the Italian state persisted with considerable uniformity from the sixth to the ninth and tenth centuries, when they began to break apart under the pressure of other social forces. The real variations of early medieval Italian history came not in the histories of the Italian states, but in the different developments of the Italian regions, with all their contrasts---between city and country, mountain and plain, agriculture and pastoralism, landlord and tenant: regions kept apart by the difficult communications of a fairly mountainous country. In the end the Italian state could not hold the disparate forces together and Italy sprang apart.

Chris Wickham chronicles these developments, describing political, economic, and social history as well as the regional history of southern Italy before showing how these forces combined as the state collapsed in the tenth century. This is the first time that the years between the Roman Empire and the rise of the Communes as a whole have been presented in the English language, making this book invaluable reading for all students of medieval Europe.
REVIEWS
"In telling the story of the decline of the state in Italy he provides an English-reading audience with the first general account of early medieval Italian political history in their language."
—History Teacher
— History Teacher

"Chris Wickham's new book fills a real gap. In telling the story of the decline of the state in Italy he provides an English-reading audience with the first general account of the early medieval Italian political history in their language."
—History Teacher
— History Teacher

"No other comprehensive history of the early Middle Ages in Italy exists for the English reader, thus making Wickham's book particularly useful . . . full of detailed information and . . . supplemented by a good annotated bibliography which fortunately includes literature in languages other than English."
—Italica
— Italica