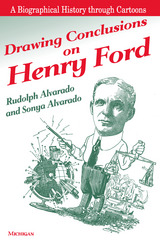 For years political cartoons have shaped the often unflattering popular view of public figures. One of the most-often-portrayed figures of the twentieth century was the automobile manufacturer Henry Ford. Through editorial drawings, a vivid picture of Ford was presented that became the source of myths that surrounded him and continue even to this day.

Drawing Conclusions on Henry Ford is the first and only collection that brings together in one volume these editorial cartoons. They date back as far as the time Ford introduced the Model T in 1908 and extend forward to the introduction of the Model A and subsequent V8 engines in the 1930s. They illustrate the emergence of many of the popular myths surrounding Henry Ford, as seen and understood by the average citizen during the opening decades of the twentieth century. With 150 illustrations, the reader is able to trace the evolving images of Ford from a time period when caricature images of public figures were a primary source of information about those persons. Sometimes funny, sometimes sharp and critical, these cartoons are entertaining in themselves. Viewed as a whole, they create anew view of the Henry Ford story.

Rudolph V. Alvarado is a freelance writer and museum consultant, as well as the former programs leader for the Henry Ford Museum and Greenfield Village. Sonya Y. Alvarado is an instructor of English, at Eastern Michigan University and a former adjunct faculty member, Wayne State University.