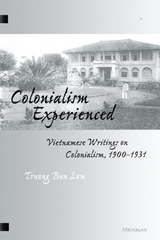 The first three decades of the twentieth century in late-colonial Vietnam--the period that also marked the transition between the dominant Confucian and nascent Western worldviews--generated an abundance of political literature in that country. The documents from this transitional era belong to a variety of genres: propaganda pamphlets, open letters to government officials, texts for private or clandestine classrooms, manifestos of political or cultural organizations, columns from newspapers, public proclamations, petitions to international agencies, and poems. Whether from the old or the new era, however, they all expressed an opinion on the colonial status of their country.
Scholar Truong Buu Lam has collected twenty of these documents, all written between 1900 and 1931, into an anthology which captures the spirit of the conflicting ideologies and the political struggles of this time. Written originally in Vietnamese, French, or classical Chinese, the documents have been translated into English by Lam and given individual introductions in an effort to clarify their historical contexts most accurately. Lam also provides a lengthy overview of the contemporary scene at the time of the writings to further illuminate the grander themes tying the writings together.
In Vietnam, all of these writings are well-known texts, quoted in every publication that examines the period under consideration; yet, to the best of our knowledge, few have been reproduced in their entirety and none has ever been translated into English. This translation marks an important addition to the fields of Southeast Asian and colonial studies and will be welcomed by historians, political scientists, and anthropologists alike.
Truong Buu Lam is Associate Professor of History, University of Hawaii at Manoa. He is editor of the collections Patterns of Vietnamese Response to Foreign Intervention, 1858-1900 and Borrowings and Adaptations in Vietnamese Culture, and the author of Resistance, Rebellion, Revolution: Popular Movements in Vietnamese History and New Lamps for Old: The Transformation of the Vietnamese Administrative Elite.
REQUEST ACCESSIBLE FILE