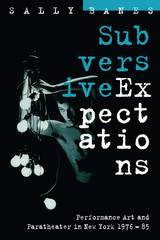 As critic for the Soho Weekly News and the Village Voice during the 1970s and 1980s, Sally Banes enjoyed an incomparable perspective on the development of what she describes as "the mongrel, elusive, indefinable genre of performance art." In fact, Banes was present during a crucial point in that development, when a previously marginalized form took, quite literally, center stage and emerged as the preeminent form of avant-garde activity.
Her reviews and articles explore the work of established artists such as Meredith Monk, Robert Wilson, Ping Chong, and Joan Jonas; events by the Bread and Puppet Theater, Robert Whitman, Charlotte Moorman, and Chris Burden; revivals of classic avant-garde performances; and the emergence of famous (and some notorious) performers such as Anne Bogart, Karen Finley, Spalding Gray, Steve Buscemi, Tim Miller, and Whoopi Goldberg. The depth and breadth of Banes's criticism realizes not only the continuing growth and development of American performance, but also the complex and sometimes surprising intersection of performance with the "other side" of the art/life divide, the "paratheater" of Japanese tea ceremonies, cat shows, circuses, art exhibits, and amateur nights at the Apollo.
Banes's work recognizes the crucial importance of the critic as a situated self that must understand not only the concepts and techniques of avant-garde art, but the rich textures of the community spaces in which that art occurs. Much as her earlier book Greenwich Village 1963: Avant-Garde Performance and the Effervescent Body captured the elusive artistic communities of America's postwar avant-garde activity, Subversive Expectations revels in the invigorating energies of Soho.
The author's approach to this complex matrix of art, community, and culture is as interdisciplinary as performance itself, drawing on the histories and theories of painting, photography, dance, theater, and folklore. Her vivid descriptions of ephemeral events and her provocative interpretations fill a gap in the history of contemporary performance, when the avant-garde met the mainstream.
Sally Banes is Marian Hannah Winter Professor of Theatre and Dance History, University of Wisconsin-Madison.
REVIEWS
"Banes was in New York at the time that much theatrical exploration was taking place. Subversive Expectations: Performance Art and Paratheater in New York, 1976-85 is an incredibly valuable collection of documents."
--Ted Shank, University of California, San Diego