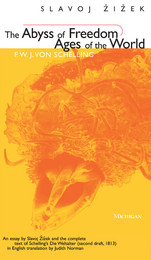 In the last decade, F. W. J. von Schelling has emerged as one of the key philosophers of German Idealism, the one who, for the first time, undermined Kant's philosophical revolution and in so doing opened up the way for a viable critique of Hegel. In noted philosopher Slavoj Zizek's view, the main orientations of the post-Hegelian thought, from Kierkegaard and Marx, to Heidegger and today's deconstructionism, were prefigured in Schelling's analysis of Hegel's idealism, and in his affirmation that the contingency of existence cannot be reduced to notional self-mediation. In The Abyss of Freedom, Zizek attempts to advance Schelling's stature even further, with a commentary of the second draft of Schelling's work The Ages of the World, written in 1813.
Zizek argues that Schelling's most profound thoughts are found in the series of three consecutive attempts he made to formulate the "ages of the world/Weltalter," the stages of the self-development of the Absolute. Of the three versions, claims Zizek, it is the second that is the most eloquent and definitive encompassing of Schelling's lyrical thought. It centers on the problem of how the Absolute (God) himself, in order to become actual, to exist effectively, has to accomplish a radically contingent move of acquiring material, bodily existence. Never before available in English, this version finally renders accessible one of the key texts of modern philosophy, a text that is widely debated in philosophical circles today.
The Abyss of Freedom is Zizek's own reading of Schelling based upon Lacanian psychoanalytic theory. It focuses on the notion that Lacan's theory--which claims that the symbolic universe emerged from presymbolic drives--is prefigured in Schelling's idea of logos as given birth to from the vortex of primordial drives, or from what "in God is not yet God." For Zizek, this connection is monumental, showing that Schelling's ideas forcefully presage the post-modern "deconstruction" of logocentrism.
Slavoj Zizek is not a philosopher who stoops to conquer objects but a radical voice who believes that philosophy is nothing if it is not embodied, nothing if it is only abstract. For him, true philosophy always speaks of something rather than nothing. Those interested in the genesis of contemporary thought and the fate of reason in our "age of anxiety" will find this coupling of texts not only philosophically relevant, but vitally important.
Slavoj Zizek is the author of The Sublime Object of Ideology, Tarrying with the Negative: Kant, Hegel and the Critique of Ideology, and most recently, The Indivisible Remainder: An Essay on Schelling and Related Matters. Currently he is a Senior Researcher at the Institute for Social Sciences, University of Ljubljana. Judith Norman is Assistant Professor of Philosophy at Trinity University in San Antonio, Texas.
REQUEST ACCESSIBLE FILE