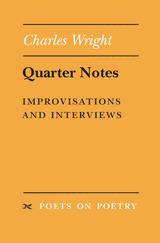 Quarter Notes harvests recent reviews, essays, memoirs, and interviews by acclaimed poet Charles Wright. Wright uses creative variations on the form of the linear essay including interviews with himself as interviewee, correspondence (with Charles Simic), and experimentation with what he calls Improvisations "non- linear associational storylines". The book's short, staccato-like bursts add up to much more than the sum of their parts.
This satisfying collection includes reminiscences and meditations on the details of memory and what it means to visit the past; the vices of titleism and the hydrosyllabic foot in poetry; a comparison of poems and journeys; appreciation of poets Donald Justice and John Crow Ransom; an attempt to define "image"; discussions of the current state of poetry; and various highlights from the Charles Wright Literary Festival.
Charles Wright's books of poetry include The World of the Ten Thousand Things and Country Music: Selected Early Poems. He received the 1993 Ruth Lilly Poetry Prize and the 1992 Award of Merit Medal from the American Academy of Arts and Letters. He is Souder Family Professor of English, University of Virginia.
REQUEST ACCESSIBLE FILE