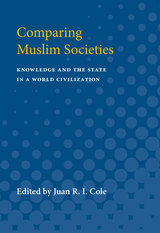 This book departs from stereotypes that often dominate Western discourse about Muslim societies. The Muslim world encompasses a wide range of countries—among them Turkey, Iraq, Egypt, Senegal, Saudi Arabia, and Morocco—each with a varying degree of religious stricture. Generalizations, therefore, can be erroneous and misleading. The contributors to this book—prominent scholars in anthropology, history, sociology, and political science—examine such issues as the ideology and political practices of Iran's ruling Shi'ite clerics, the impact of state policies on the status of women, the controversy over parliamentary government in the Arab world, the role of modern intellectuals, and charisma and leadership in tribal societies. The arguments the authors put forward often overturn conventional opinion about the Muslim world. This original and important book reminds us that Muslim society is not a monolith, but that it encompasses a rich variety of cultures.