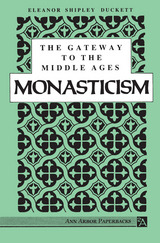 The Gateway to the Middle Ages: Monasticism
by Eleanor Shipley Duckett
University of Michigan Press, 1988
Paper: 978-0-472-06051-1
In an era when the sounds of monasticism's interior life speak to a new generation, Eleanor Shipley Duckett offers an illuminated description of its development under such figures as Columban, "the saint afire with Irish enthusiam"; St. Benedict, greatest of the monks, who established a pattern of the religious life still vibrant to this day; and St. Gregory, Benedict's pupil and greatest of the popes, who more than any other prepared the See of Rome for its triumphant emergence in the Middle Ages.
"Professor Duckett writes a history of this period that is as full of intellectual excitement as those centuries were of military excitement." -- Christian Century
"New light on the troubled origins of the medieval spirit." --New Republic
Eleanor Shipley Duckett was Professor Emerita of Latin Languages and Literature, Smith College.
REQUEST ACCESSIBLE FILE