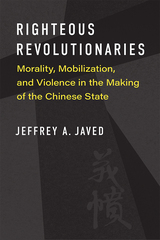 Righteous Revolutionaries illustrates how states appeal to popular morality—shared understandings of right and wrong—to forge new group identities and mobilize violence against perceived threats to their authority. Jeffrey A. Javed examines the Chinese Communist Party’s mass mobilization of violence during its land reform campaign in the early 1950s, one of the most violent and successful state-building efforts in history. Using an array of novel archival, documentary, and quantitative historical data, this book illustrates that China’s land reform campaign was not just about economic redistribution but rather part of a larger, brutally violent state-building effort to delegitimize the new party-state’s internal rivals and establish its moral authority.

Righteous Revolutionaries argues that the Chinese Party-state simultaneously removed perceived threats to its authority at the grassroots and bolstered its legitimacy through a process called moral mobilization. This mobilization process created a moral boundary that designated a virtuous ingroup of “the masses” and a demonized outgroup of “class enemies,” mobilized the masses to participate in violence against this broadly defined outgroup, and strengthened this symbolic boundary by making the masses complicit in state violence. Righteous Revolutionaries shows how we can find traces of moral mobilization in China today under Xi Jinping’s rule. In an era where states and politicians regularly weaponize moral emotions to foment intergroup conflict and violence, understanding the dynamics of violent mobilization and state authority are more relevant than ever before.
AUTHOR BIOGRAPHY
Jeffrey A. Javed is a former postdoctoral fellow at the Lieberthal-Rogel Center for Chinese Studies and the Weiser Center for Emerging Democracies at the University of Michigan. He currently lives in San Francisco.
REVIEWS
“This is an ambitious, well-written, thoughtful and polished piece of work. While it situates itself well within larger literatures on China and comparative politics, it also makes a novel argument about state building in mid-twentieth-century China.”
—Julia Strauss, SOAS University of London
— Julia Strauss