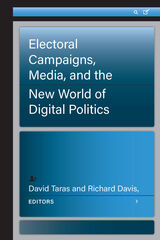 Today, political leaders and candidates for office must campaign in a multimedia world through traditional forums—newspapers, radio, and television—as well as new digital media, particularly social media. Electoral Campaigns, Media, and the New World of Digital Politics chronicles how Twitter, Facebook, Reddit, email, and memes are used successfully and unsuccessfully to influence elections. Each of these platforms have different affordances and reach various audiences in different ways. Campaigns often have to wage different campaigns on each of these mediums. In some instances, they are crucial in altering coverage in the mainstream media. In others, digital media remains underutilized and undeveloped. As has always been the case in politics, outcomes that depend on economic and social conditions often dictate people’s readiness for certain messages. However, the method and content of those messages has changed with great consequences for the health and future of democracy.

This book answers several questions: How do candidates/parties reach audiences that are preoccupied, inattentive, amorphous, and bombarded with so many other messages? How do they cope with the speed of media reporting in a continuous news cycle that demands instantaneous responses? How has media fragmentation altered the campaign styles and content of campaign communication, and general campaign discourse? Finally and most critically, what does this mean for how democracies function?

Richard Davis is Professor of Political Science at Brigham Young University.
REVIEWS
“In our era of elections punctuated by digitally enabled voter manipulation techniques and extremist right-wing attacks on the core institutions of liberal democracy, it has never been more important to understand what parties, movements, and ordinary citizens do with media during campaigns. Deftly avoiding simplistic explanations and crude binary distinctions between traditional and social media, the contributors to this timely volume carefully reveal the paradoxes and complexities of how digital communication is reshaping elections across the globe.”
—Andrew Chadwick, author of The Hybrid Media System: Politics and Power.
— Andrew Chadwick

“This critically important volume addresses the fundamental questions of how and to what extent digital media impact electoral campaigns. Taras and Davis have assembled distinguished scholars from around the globe whose compelling research demonstrates that the answers differ substantially based on the electoral context. Each study takes a unique approach to exploring significant aspects of digital media campaigning, which provides a rich basis for comparative study. This collection fills a gap in studies of elections in the digital age by bringing theoretical and empirical rigor to investigations of campaigning.”
—Diana Owen, Georgetown University
— Diana Owen

“This edited collection is a ‘must read’ for scholars of digital campaigning. As well as providing fresh comparative insights into the role of new media in elections, collectively the contributions show the core question for scholars in the field is no longer whether, but how, the new technology has changed political campaigns.”
—Rachel Gibson, University of Manchester
— Rachel Gibson

Chapter 4: A Women’s Place is in the (U.S. ) House: An analysis of issues women candidates discussed on Twitter in 2016 and 2018 Congressional elections

Chapter 5: Two Different Worlds; The gap between the interests of voters and the media in Canada in the 2019 Federal Election

Chapter 7: “Many thanks for your support”: Email Populism and the People’s Party of Canada

Chapter 8: Benjamin Netanyahu and online campaigning in Israel’s 2019 and 2020 elections

Chapter 9: Stabbed democracy: How social media and home views made a populist president in Brazil

Rosalynd Southern, The University of Liverpool

Chapter 11: Populists and social media campaigning in Ukraine: The Election of Volodymyr Zelensky

Chapter 12: The changing face of political campaigning in Kenya

Chapter 14: “Many thanks for your support”: Email Populism and the People’s Party of Canada