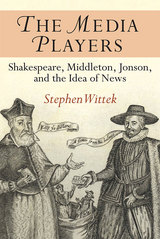 The Media Players: Shakespeare, Middleton, Jonson, and the Idea of News builds a case for the central, formative function of Shakespeare’s theater in the news culture of early modern England. In an analysis that combines historical research with recent developments in public sphere theory, Dr. Stephen Wittek argues that the unique discursive space created by commercial theater helped to foster the conceptual framework that made news possible.


Dr. Wittek’s analysis focuses on the years between 1590 and 1630, an era of extraordinary advances in English news culture that begins with the first instance of serialized news in England and ends with the emergence of news as a regular, permanent fixture of the marketplace. Notably, this period of expansion in news culture coincided with a correspondingly extraordinary era of theatrical production and innovation, an era that marks the beginning of commercial theater in London, and has left us with the plays of William Shakespeare, Ben Jonson, and Thomas Middleton.
AUTHOR BIOGRAPHY
Stephen Wittek is a post-doctoral fellow at McGill University, where he received his PhD in Literature.

REVIEWS
"Stephen Wittek’s The Media Players: Shakespeare, Middleton, Jonson, and the Idea of News argues that theater played a central role in the development of news culture and a proto-public sphere in seventeenth century England. This supplements recent work in history on the early seventeenth-century development of English news culture by Curtis Perry forcefully arguing for the importance of theater, even though it is also acknowledged that news is a 'massive public conversation' in which all manner of producers and consumers participate."
--Omnibus
— Omnibus

"In a clear and authoritative manner, Wittek succeeds in making accessible some complex ideas. His view of early modern theatre as a powerful and interconnected cultural driver of news media is compelling and thought provoking."
--Parergon
— Parergon

TABLE OF CONTENTS
Title Page
Copyright Page
Contents
1. Early Modern Drama and the Idea of News
Theater and News Culture: A Brief History
The Idea of News
The Proto-Public Sphere
Public Making and Printed News
2. The Winter’s Tale, News, Truth, and Belief
Shakespeare and News
Autolycus, Broadsheets, and Mercury
The Meaning of a Balladeer on a London Stage in 1610
Ballads, Pamphlets, Monstrous Births, and Singing Fish
Shakespeare and the Problem of Belief
"Times News” and New Forms of Knowledge
3. A Game at Chess and the Making of a Theatrical Public
Middleton and News
News from Spain, to Court, to Print, to Stage
Hispanophobia and Hispanophilia
Theater as News Event
4. The Staple of News and the Invention of Media Criticism
Jonson and News
The Apostrophized Public
Jonson and the Problem of Interpretation
A News Industry from the Early Modern Near Future
News and Mock News
Epilogue: News Is What They Say It Is
Appendix: Names Frequently Used inButter Newsbooks, 1623–1626
Notes
Critical Editions
Contemporary Documents
Contemporary Publications
Secondary Sources
Index
REQUEST ACCESSIBLE FILE