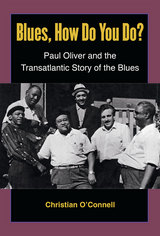 Recent revisionist scholarship has argued that representations by white “outsider” observers of black American music have distorted historical truths about how the blues came to be. While these scholarly arguments have generated an interesting debate concerning how the music has been framed and disseminated, they have so far only told an American story, failing to acknowledge that in the post-war era the blues had spread far beyond the borders of the United States. As Christian O’Connell shows in Blues, How Do You Do? Paul Oliver’s largely neglected scholarship—and the unique transatlantic cultural context it provides—is vital to understanding the blues.


O’Connell’s study begins with Oliver’s scholarship in his early days in London as a writer for the British jazz press and goes on to examine Oliver’s encounters with visiting blues musicians, his State Department–supported field trip to the US in 1960, and the resulting photographs
and oral history he produced, including his epic “blues narrative,” The Story of the Blues (1969). Blues, How Do You Do? thus aims to move away from debates that have been confined within the limits of national borders—or relied on clichés of British bands popularizing American music in America—to explore how Oliver’s work demonstrates that the blues became a reified ideal, constructed in opposition to the forces of modernity.

AUTHOR BIOGRAPHY
Christian O’Connell is a Senior Lecturer in American History at the University of Gloucestershire.

TABLE OF CONTENTS
Contents
Acknowledgments
Introduction
1. Beginnings: The Early Revival
Gallery 1
2. Blues Fell This Morning: The Blues and Black Life
3. “You asked me about it, so I’m tellin’ you”: Representation through Oral History and Photography
Gallery 2
4. Tracing the Tradition: History and “Invention”
5. The Blues Narrative: A Story of Triumph over Tragedy
Gallery 3
Afterword
Notes
Bibliography
Index
REQUEST ACCESSIBLE FILE