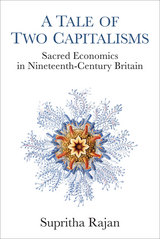 No questions are more pressing today than the ethical dimensions of global capitalism in relation to an unevenly secularized modernity. A Tale of Two Capitalisms offers a timely response to these questions by reexamining the intellectual history of capitalist economics during the nineteenth century. Rajan’s ambitious book traces the neglected relationships between nineteenth-century political economy, anthropology, and literature in order to demonstrate how these discourses buttress a dominant narrative of self-interested capitalism that obscures a submerged narrative within political economy. This submerged narrative discloses political economy’s role in burgeoning theories of religion, as well as its underlying ethos of reciprocity, communality, and just distribution.


Drawing on an impressive range of literary, anthropological, and economic writings from the eighteenth through the twenty-first century, Rajan offers an inventive, interdisciplinary account of why this second narrative of capitalism has so long escaped our notice. The book presents an unprecedented genealogy of key anthropological and economic concepts, demonstrating how notions of sacrifice, the sacred, ritual, totemism, and magic remained conceptually intertwined with capitalist theories of value and exchange in both sociological and literary discourses.