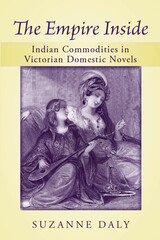 "The Empire Inside is unique in its tight focus on the objects from one geographical location, and their deployment in one genre of fiction. This combination results in a powerful study with a wealth of fine formal analyses of literary texts and a similar trove of marvelous historical data."
---Elaine Freedgood, New York University

"In The Empire Inside, Suzanne Daly does a wonderful job integrating an array of primary materials, especially novels and journal essays, to show the extent to which these ‘foreign’ colonial products of India represented absolutely central aspects of domestic life, at once part of the unremarkable everyday experience of Victorians and rich with meanings."
---Timothy Carens, College of Charleston

By the early nineteenth century, imperial commodities had become commonplace in middle-class English homes. Such Indian goods as tea, textiles, and gemstones led double lives, functioning at once as exotic foreign artifacts and as markers of proper Englishness. The Empire Inside: Indian Commodities in Victorian Domestic Novels reveals how Indian imports encapsulated new ideas about both the home and the world in Victorian literature and culture. In novels by Charlotte Brontë, Charles Dickens, and Anthony Trollope, the regularity with which Indian commodities appear bespeaks their burgeoning importance both ideologically and commercially. Such domestic details as the drinking of tea and the giving of shawls as gifts point us toward suppressed connections between the feminized realm of private life and the militarized realm of foreign commerce.

Tracing the history of Indian imports yields a record of the struggles for territory and political power that marked the coming-into-being of British India; reading the novels of the period for the ways in which they infuse meaning into these imports demonstrates how imperialism was written into the fabric of everyday life in nineteenth-century England. Situated at the intersection of Victorian studies, material cultural studies, gender studies, and British Empire studies, The Empire Inside is written for academics, graduate students, and advanced undergraduates in all of these fields.

"The Empire Inside is a valuable addition to the recent material turn in Victorian studies, and its attention to the regular habitations of Indian things in Victorian domestic novels proves to be a rich mine for exploring ideas of the empire, and of Englishness."
—Victoriographies

"What makes Daly's approach fresh and engaging is her tight geographic and generic focus: she examines several specific commodities, all from India, as represented in mid-Victorian domestic novels. ... Daly succinctly weaves together historical context, literary analysis, and theoretical framework, drawing on canonical and more obscure novels, primary historical documents, and a wide range of essays from Victorian periodicals. Her study is likely to be of considerable use to scholars interested in Victorian material culture, India and imperialism, and the curious ways in which the foreign and the imperial were absorbed into quotidian English life and identity."
—Studies in the Novel

"...a throughful look at the imported props and costumes of Victorian domesticity as reprsented in novels of the time. Her analysis focuses on four Indian commodities pervasive in middle- and upper-middle-class Victorian life: Kashmir shawls, cotton, diamonds, and tea...makes a convincing case that the origins of things may never be safely disregarded, however obscure they - or however common the things themselves - might appear to be." - Emily A. Haddad, Victorian Studies
— Emily A. Haddad, Victorian Studies