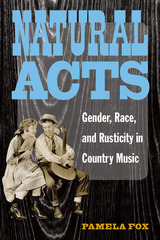 "'All I gotta do is act naturally,' Buck Owens sang, and Pamela Fox knows where the acting comes in. From early hillbilly acts to alt.country, Natural Acts lays bare, with wide-ranging scholarship and incisive analysis, the ideologies of authenticity on which country music rests. As engrossing and useful as any book I know on country music."
---Eric Lott, author of Love and Theft: Blackface Minstrelsy and the American Working Class

"The first completely mature book of country music historical criticism. It is a deep investigation of country music's power to articulate the displaced pleasures and anxieties of a society wracked by structural change. Historically rigorous, Fox uncovers documents that demonstrate the ongoing power of minstrelsy in barn dance programs across the country past World War II; musically and lyrically astute, she shows how the best honky-tonk music simultaneously critiques the dangers of that setting while seductively luring listeners to those sawdust and alcohol drenched environments; with her ear attuned to the formal complexities of autobiography, Fox directs our attention to the contradictory performance of identity that characterizes the life stories of Reba McEntire, Naomi Judd, Dolly Parton, and others. Natural Acts is provocative, stunning, and engagingly written. Country music studies has come of age."
---Barry Shank, The Ohio State University

Whether found in country barn dances, the plaintive twang of Hank Williams, the glitzy glamour of Dolly Parton, or the country-pop sound of Faith Hill, country music has always maintained an allegiance to its own authenticity. Its specific sounds and images have changed over the past century, but country music has consistently been associated with rusticity, a notion connected to the working class and rooted in ideals like unspoiled rural life and values and humble origins. The music suggests not only uncomplicated musical arrangements and old-time instruments such as the banjo and fiddle, but performers who identify with their everyday fans.

Pamela Fox is Associate Professor of English and Director of the Women's and Gender Studies Program at Georgetown University. She is the author of Class Fictions: Shame and Resistance in the British Working-Class Novel, 1890-1945 and coeditor (with Barbara Ching) of Old Roots, New Routes: The Cultural Politics of Alt.Country Music.