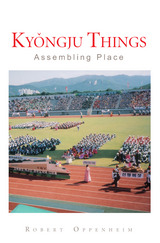 Kyongju is South Korea's preeminent "culture city," an urban site rich with archaeological wonders that residents compare to those of Nara, Xian, and Rome. By examining these ancient objects in relation to the controversies that engulfed South Korea's high-speed railway line when it was first proposed in the 1990s, Kyongju Things offers a grounded and theoretically sophisticated account of South Korean development and citizenship in the last quarter of the twentieth century. Its sensitivity to issues of place, knowledge, and cultural heritage and its innovative use of network theory will be of interest to a wide range of scholars in anthropology, Asian studies, the history of science and technology, cultural geography, urban planning, and political science.

Robert Oppenheim is Assistant Professor of Asian Studies at the University of Texas at Austin.

"In Kyongju Things, Robert Oppenheim employs an innovative theoretical blend to insightfully illuminate the interactions of agency and objects in the making of a 'place.'"
---Roger L. Janelli, Professor Emeritus, Department of East Asian Languages and Cultures and Department of Folklore and Ethnomusicology, Indiana University

"Kyongju Things is responsible, pathbreaking, and ambitious, with a stunning and welcoming introduction . . . Oppenheim calls upon a theoretical tool kit that allows him to productively re-think place, locality, technology, things, and subjectivity in ways that really do challenge the existing scholarship on South Korea. Kyongju Things will make a splash in Korean studies."
---Nancy Abelmann, Associate Professor of Anthropology, University of Illinois at Urbana-Champaign, and author of Echoes of the Past, Epics of Dissent: A South Korean Social Movement