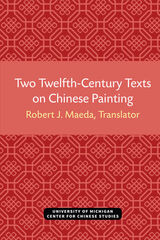 Two Twelfth-Century Texts on Chinese Painting presents two texts in translation that provide dual insight into the Painting Academy of Emperor Hui-tsung and the literati school of painting.
The Shan-shui ch’un-ch’uan chi is a treatise for beginning landscape painters dated to the Hsüan-ho era. The treatise was written by Han Cho, a reputed member of the Academy, but the text was not specifically directed at Academicians. The treatise collects and orders previous writings on landscape painting; one of Han Cho’s main goals is to list all landscape definitions and their practical application in painting. Yet his view is more detached and analytical than a stereotypical Academy painter, revealing an approach reminiscent of Confucian scholarship and literati painting as well.
The Hua-chi by Teng Ch’un is a history of painting that was written as a sequel to two earlier painting histories. In ten chapters, Teng Ch’un compiles facts and critical evaluations of painters from 1075 to 1167, as well as listings of selected masterpieces. Teng Ch’un provides more specific information about the Academy than Han Cho, discussing its organization and examination system, and noting that “form-likeness” and adherence to rules were leading standards for painting in the Academy. On the other hand, he thinks that painting should transmit “soul,” not just “form.” Thus, Teng Ch’un writes the history of both the establishment values of the Academy and the intellectual tendencies of the literati.
AUTHOR BIOGRAPHY
Robert J. MAEDA is Professor of Fine Arts at Brandeis University.
TABLE OF CONTENTS
Cover
Title
Copyright
Contents
Introduction
Notes
Part I: Shan-shui ch'un-chüan chi
Notes
Part II: Hua-chi
Notes
REQUEST ACCESSIBLE FILE