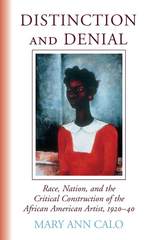 “A major contribution to the scholarship of African American artists in the inter-war period. With scrupulous research and probing analyses, Calo’s study enables scholars, students, and those interested in the Harlem Renaissance to grasp the intellectual debates, institutional support, and art world promotion that advanced an emerging cohort of African American artists.”

“A careful, thorough, historically grounded study that builds a new and significant argument challenging conventional histories of African American art. Sure to become indispensable to any scholarly discussion of American art or African American cultural studies.”

Mary Ann Calo is Professor of Art History and Director of the Institute for the Creative and Performing Arts at Colgate University. She is author of Bernard Berenson and the Twentieth Century and editor of Critical Issues in American Art: A Book of Readings.