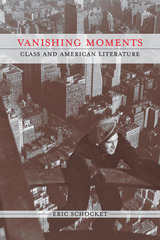 Vanishing Moments analyzes how various American authors have reified class through their writing, from the first influx of industrialism in the 1850s to the end of the Great Depression in the early 1940s. Eric Schocket uses this history to document America’s long engagement with the problem of class stratification and demonstrates how deeply America’s desire to deny the presence of class has marked even its most labor-conscious cultural texts.

Schocket offers careful readings of works by Herman Melville, Rebecca Harding Davis, William Dean Howells, Jack London, T. S. Eliot, Gertrude Stein, Muriel Rukeyser, and Langston Hughes, among others, and explores how these authors worked to try to heal the rift between the classes. He considers the challenges writers faced before the Civil War in developing a language of class amidst the predominant concerns about race and slavery; how early literary realists dealt with the threat of class insurrection; how writers at the turn of the century attempted to span the divide between the classes by going undercover as workers; how early modernists used working-class characters and idioms to shape their aesthetic experiments; and how leftists in the 1930s struggled to develop an adequate model to connect class and literature. Vanishing Moments’ unique combination of a broad historical scope and in-depth readings makes it an essential book for scholars and students of American literature and culture, as well as for political scientists, economists, and humanists.
Eric Schocket is Associate Professor of American Literature at Hampshire College.
“An important book containing many brilliant arguments—hard-hitting and original. Schocket demonstrates a sophisticated acquaintance with issues within the working-class studies movement.”
--Barbara Foley, Rutgers University
TABLE OF CONTENTS