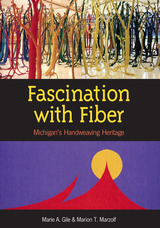 "A premiere work offering a rich chronicle of weaving in Michigan. Colorful stories tell of Michigan's textile people, places, and events, and show the important role that this state played in preserving and progressing the culture of cloth locally and nationally. I came away with a new sense of pride and joy at being a part of this rich human history and inspired to continue exploring within this great tradition!"
---Chris Triola, Fiber Artist

"Fascination with Fiber is a well-documented history, with consequence! The authors reveal surprising continuity in relationships, with results that are far-reaching. Readers will be moved beyond border as they come to realize the extensive influences generated in Michigan."
---Gerhardt Knodel, Director, Cranbrook Academy of Art

Fascination with Fiber is the first complete look at Michigan's rich tradition of handweaving, from pioneer log cabin days to the contemporary era of digital computer-aided looms.

Michigan has been at the center of handweaving and fiber arts and crafts since early settlers brought their skills with them from countries where handicrafts and weaving were traditionally strong. The textiles they produced in their new country, from linens to coverlets to rugs, took on a distinctly American expression. In the twentieth century, the formation of guilds, craft communities, and formal art programs created a revival of interest in handweaving as an opportunity for artistic expression so that by latter part of the century the state played a vital role in the national fiber movement.

Weavers and historians themselves, authors Marie A. Gile and Marion T. Marzolf focus on the people and forces that have kept the craft of handweaving alive in Michigan and indeed throughout the country for over two centuries: a passionate group of individuals and weaving communities enlivened through shared necessity, opportunity, and creativity.

Gile and Marzolf base their book on oral histories, interviews, and documentary and artifact research. With its tales of colorful characters such as Mary Atwater, the gun-toting weaver from Montana who helped organize the handweaving industry; to the formation of the Michigan League of Handweavers in 1959; and the "Fascination with Fiber" exhibit that opened in 2004; Fascination with Fiber brings the story of handweaving in Michigan to life like no other book.

Marie A. Gile is Textile Specialist and Research Associate at Michigan State University Museum in Lansing. She has been a weaver and fiber artist for twenty-five years. Marion T. Marzolf is Professor Emerita in the Department of Journalism and Communication at the University of Michigan. Since retiring in 1995, she has taught basic weaving, has served as president of the Michigan League of Handweavers, and has exhibited in galleries statewide.