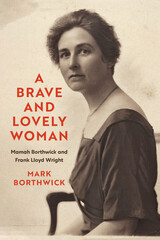 Mamah Borthwick was an energetic, intelligent, and charismatic woman who earned a master’s degree at a time when few women even attended college, translated writings by a key figure of the early feminist movement, and taught at one of Germany’s best schools for boys. She is best known, however, as the mistress of the famous American architect Frank Lloyd Wright, and for her shocking murder at the renowned Wisconsin home he built for her, Taliesin. A Brave and Lovely Woman offers an important corrective to the narrative of Wright and Borthwick, a love story as American in character as it is Shakespearean in conclusion.

Little of Wright’s life and work has been left untouched by his many admirers, critics, and biographers. And yet the woman who stood at the center of his emotional life, Mamah Borthwick, has fallen into near obscurity. Mark Borthwick—a distant relative—recenters Mamah Borthwick in her own life, presenting a detailed portrait of a fascinating woman, a complicated figure who was at once a dedicated mother and a faithless spouse, a feminist and a member of a conservative sorority, a vivacious extrovert and a social pariah. Careful research and engaging prose at last give Borthwick, an obscure but crucial character in one of America’s most famous tragedies, center stage.
AUTHOR BIOGRAPHY
Mark Borthwick served as the director of the U.S. Asia Pacific Council at the East-West Center. He is the author of Pacific Century: The Emergence of Modern Pacific Asia.
REVIEWS
“A substantive, thoughtful, and carefully wrought contribution to our historical knowledge about Mamah Borthwick. The author’s patient, assiduous research and clear, straightforward presentation offer much-needed correctives to the narrative of Borthwick and her important relationship with Frank Lloyd Wright.”—Anthony Alofsin, author of Wright and New York: The Making of America’s Architect


“Meticulously researched and full of information drawn from newly discovered sources, this book is the first to restore Mamah Borthwick—a highly educated, vibrant, and well-connected woman—to her proper place in the life and work of Frank Lloyd Wright and in the history of twentieth-century feminism.”—Alice T. Friedman, author of Women and the Making of the Modern House


“An incredibly well-written and deeply researched portrayal of Mamah Borthwick. So much of her life has focused on her tragic ending without knowing more specifically who she was as a person: strong, intelligent, and fiercely brave. While her life indeed ended tragically early, there is no doubt that her brave and lovely spirit is still embedded in her home, Taliesin.”—Carrie Rodamaker, executive director, Taliesin Preservation