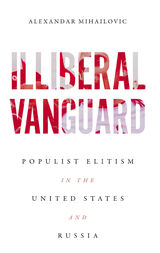 Recent years have witnessed a growing affinity between increasingly radicalized right-wing movements in the United States and Russia, countries that only recently viewed each other as intractable foes. In Illiberal Vanguard: Populist Elitism in the United States and Russia, Alexandar Mihailovic untangles this confluence, considering ethnonationalist movements in both countries and their parallel approaches to gender, race, and performative identity. Rather than probe specific points of possible contact or political collusion, Mihailovic unveils the mirrored styles of thought that characterize far-right elitism in two erstwhile enemy nations.

Mihailovic investigates notable right-wing actors like Steve Bannon and Alexander Dugin and targets of right-wing ire such as globalization, LGBTQ+ activism, and mobilizations to remove controversial statues (that honor Confederate generals and Soviet leaders, for instance), but the argument extends beyond the specifics. How and why are radical right-wing movements developing along such similar trajectories in two nominally oppositional countries? How do religious sectarianism, the construction of whiteness, and institutionalized homophobia support each other in this transnational, informal, but powerful allegiance? Despite their appeals to populism and flamboyant theatrics, Mihailovic argues, much of the answer can be found in the mutual desire to justify and organize an illiberal vanguard of elite intellectuals, one that supports and advocates for a new authoritarianism.
AUTHOR BIOGRAPHY
Alexandar Mihailovic is professor emeritus of comparative literature and Russian at Hofstra University and visiting professor at Bennington College. His books include The Mitki and the Art of Postmodern Protest in Russia, Corporeal Words: Mikhail Bakhtin’s Theology of Discourse, and an edited volume, Tchaikovsky and His Contemporaries: A Centenary Symposium.
REVIEWS
“This book raises a crucial issue for our time. Mihailovic brings a scholarly eye and a sharp cross-cultural understanding to fill important gaps in our knowledge not only about rightist movements in both the United States and Russia but how they relate to each other.”—Tom Nichols, contributing writer, The Atlantic and author of Our Own Worst Enemy


“Sensitive to cultural differences, Alexandar Mihailovic’s brilliantly articulate Illiberal Vanguard draws rich parallels between radical conservatives in both the United States and Russia and their strange alliance in the Internet age, focusing particularly on the emergence of a public-intellectual elite among them. This book is a must-read for those who would like to untangle the complicated roots of Russian and American neonationalism.”—Edith W. Clowes, author of Russia on the Edge: Imagined Geographies and Post-Soviet Identity

Introduction: The Neoglobalism of the American and Russian Far-Right Intelligentsia
Chapter 1: A Place at the High Table: Mythologizing the Russian Intelligentsia, Crusading against US Elites
Chapter 2: Whither the State? Steve Bannon, the Alt-Right, and Lenin’s State and Revolution
Chapter 3: Hijacking Academic Authority: Racism and the Internet Expertise of Kevin MacDonald and Alexander Dugin
Chapter 4: The Spectacle of God’s Will: Performing Homophobia in the Russian Federation
Chapter 5: Statuary Performances: Monuments and Neopaganism in the United States and the Russian Federation
Conclusion: The Fight against Rightist Elites