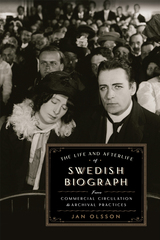 Nearly all of the studio’s original negatives were destroyed in an explosion in 1941, but Olsson’s comprehensive archival research shows how the company operated in a commercial, international arena, and how it was influenced not just by Nordic aesthetics or individual genius but also by foreign audiences’ expectations, technological demands, Hollywood innovations, and the gritty back-and-forth between economic pressures, government interference, and artistic desires. Olsson’s focus is wide, encompassing the studio’s production practices, business affairs, and cinematographic conventions, as well as the latter-day archival efforts that both preserved and obscured parts of Swedish Biograph’s story, helping construct the company’s rosy legacy. The result is a necessary rewrite to Swedish film historiography and a far fuller picture of a canonical film studio.

Jan Olsson is professor emeritus of cinema studies at Stockholm University. The author of Hitchcock à la Carte and the founding editor of Aura: Film Studies Journal, he has published widely on multiple aspects of film and media studies.

REVIEWS
“Fusing together archival digging, business history, film politics, and film and cultural analysis, Jan Olsson offers a rich exploration of how Sweden’s Golden Age of silent cinema came to be. Anyone with an interest in film history will want to read The Life and Afterlife of Swedish Biograph, the first full-length work of English-language scholarship to tackle the subject.”—Andrew Nestingen, author of The Cinema of Aki Kaurismäki: Contrarian Stories

“Recovers and explores a canonical period of silent-era Swedish film history that has previously been woefully neglected. Jan Olsson does a magisterial job of contextualizing and triangulating lost materials and treasures through deep research and analysis. An invaluable contribution.”—Arne Lunde, author of Nordic Exposures: Scandinavian Identities in Classical Hollywood Cinema

Concepts and Considerations: An Introduction

2 Starting Up the Lidingö Studio

8 Crossroads: From Lidingö to Berlin via Dalecarlia and London


Appendix 1. Intertitles and Other Indications of Temporal Shifts Between Reels in Films from 1912 to 1916

Appendix 3. Directors at the SB Studio (Apart from Sjöström and Stiller)