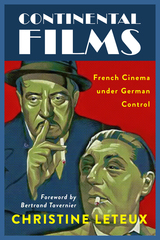 From 1940 to 1944, the German-owned Continental Films dominated the French film landscape, producing thirty features throughout the Nazi occupation. Charged with producing entertaining and profitable films rather than propaganda, producer Alfred Greven employed some of the greatest French actors and most prestigious directors of the time, including Maurice Tourneur, Henri Decoin, Henri-Georges Clouzot, and Marcel Carné.
Using recently opened archival documents, including reams of testimony from the épuration (purification) hearings conducted shortly after the war, Christine Leteux has produced the most authoritative and complete history of the company and its impact on the French film industry—both during the war and after. She captures the wide range of responses to the firm from those who were eager to work for a company whose ideology matched their own, to others who reluctantly accepted contracts out of necessity, to those who abhorred the company but felt compelled to participate in order to protect family members from Nazi reprisals. She examines not only the formation and management of Continental Films but also the personalities involved, the fraught and often deadly political circumstances of the period, the critical reception of the films, and many of the more notorious and controversial events.
As Bertrand Tavernier explains in his foreword, Leteux overturns many of the preconceptions and clichés that have come to be associated with Continental Films. Published to rave reviews in French and translated by the author into English, this work shatters expectations and will reinvigorate study of a lesser-known but significant period of French film history.
AUTHOR BIOGRAPHY
Christine Leteux is the author of the biographies Albert Capellani: Cinéaste du romanesque (self-translated into English as Albert Capellani: Pioneer of the Silent Screen) and Maurice Tourneur: Réalisateur sans frontières. She is the translator of several books by British film historian and filmmaker Kevin Brownlow.
REVIEWS
Praise for the French edition:

“A striking 400-page ‘feature film’ as precise as the mechanics of a vintage Simplex projector. ‘I’ve been waiting for such a book for years,’ exclaims Bertrand Tavernier in the foreword. He is not the only one.”—Le Canard Enchaîné


“[A] penetrating monograph. . . . Leteux writes with a trial lawyer’s precision, packing copious research into just over 200 pages. . . . Leteux has produced a detailed picture of an industry under duress that never bogs down in unnecessary details.”—Shepherd Express