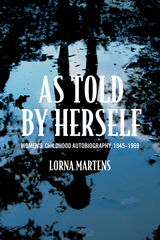 As Told by Herself offers the first systematic study of women's autobiographical writing about childhood. More than 175 works—primarily from English-speaking countries and France, as well as other European countries—are presented here in historical sequence, allowing Lorna Martens to discern and reveal patterns as they emerge and change over time. What do the authors divulge, conceal, and emphasize? How do they understand the experience of growing up as girls? How do they understand themselves as parts of family or social groups, and what role do other individuals play in their recollections? To what extent do they concern themselves with issues of memory, truth, and fictionalization?

Stopping just before second-wave feminism brought an explosion in women's childhood autobiographical writing, As Told by Herself explores the genre's roots and development from the mid-nineteenth century, and recovers many works that have been neglected or forgotten. The result illustrates how previous generations of women—in a variety of places and circumstances—understood themselves and their upbringing, and how they thought to present themselves to contemporary and future readers.
AUTHOR BIOGRAPHY
Lorna Martens is a professor of German and comparative literature at the University of Virginia and is the author of several books, including The Promise of Memory: Childhood Recollection and Its Objects in Literary Modernism.
REVIEWS
"This is a comprehensive, insightful literary history of women’s autobiographies of childhood. Thoroughly researched, highly original, and persuasive, As Told by Herself: Women’s Childhood Autobiography, 1845–1969 addresses a significant scholarly gap in very productive and important ways."—Kate Douglas, author of Contesting Childhood: Autobiography, Trauma and Memory

2.  The Interwar Years:   Memoirs and Semi-Memoirs
Memoirs
Semi-Memoirs
1935
“Splendor in the Grass”
Humor
Souvenirs
In sum

3.  The Interwar Years:  The Golden Age of Psychological Self-Portraiture
Self-portraits in the 1920s
How I Became What I Became
In Your Face
Self-Expression in the 1930s
Self-Assertion
The Child’s Vision
The Study
In sum

4.  Women’s Childhood Autobiography during World War II
Semi-Memoirs
Self-Focused Works
Self-Assertion
Remembering
The Family
Nest and the Challenges beyond It
In sum

5.   Women’s Childhood Autobiography from the End of the Second World War through the 1960s
Autobiographies of Abuse
Self-Focused Autobiographies
Bildungsroman
Relationships
The Child’s Perspective
A Stylistic Mix
In sum
Conclusion

Bibliography of Women’s Childhood Autobiographies to 1969