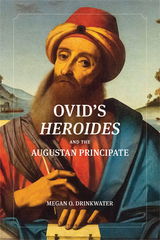 43 BCE, the year after the assassination of Julius Caesar. While the Roman republic had seen many conflicts, it was this civil war, headed by the vengeful triumvirate of Mark Anthony, Marcus Lepidus, and Octavian, that irrevocably transformed Rome with its upheaval. What followed was years of fighting and the eventual ascendancy of Octavian, who from 27 BCE onwards would be best known as Caesar Augustus, founder of the Roman Principate.

It was in this era of turmoil and transformation that Ovid, the Roman poet best known for Metamorphoses, was born. The Heroides, one of his earliest and most elusive works, is not written from the first-person perspective that so often characterizes the elegiac poetry of that time but from the personae of tragic heroines of classical mythology.

Megan O. Drinkwater illustrates how Ovid used innovations of literary form to articulate an expression of the crisis of civic identity in Rome at a time of extreme and permanent political change. The letters are not divorced from the context of their composition but instead elucidate that context for their readers and expose how Ovid engaged in politics throughout his entire career. Their importance is as much historical as literary. Drinkwater makes a compelling case for understanding the Heroides as a testament from one of Rome’s most eloquent writers to the impact that the dramatic shift from republic to empire had on its intellectual elites.
AUTHOR BIOGRAPHY
Megan O. Drinkwater is a professor and chair of the department of classics at Agnes Scott College. She has previously published several articles on different aspects of Ovid’s work and has contributed to The Cambridge Companion to Latin Love Elegy.
REVIEWS
“Ovid’s Heroides and the Augustan Principate provides an innovative, new avenue for reading the Heroides, pushing us to see the work as far more subversive than typically thought, as one that deviates from canonical narratives and creates sympathy for the powerless in the face of the powerful.”—Bartolo Natoli, Randolph-Macon College


Megan O. Drinkwater is a professor and chair of the department of classics at Agnes Scott College. She has previously published several articles on different aspects of Ovid’s work and has contributed to The Cambridge Companion to Latin Love Elegy.