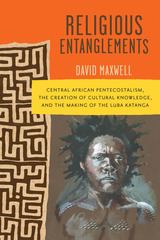 Under the leadership of William F. P. Burton and James Salter, the Congo Evangelistic Mission (CEM) grew from a simple faith movement founded in 1915 into one of the most successful classical Pentecostal missions in Africa, today boasting more than one million members in the Democratic Republic of the Congo. Drawing on artifacts, images, documents, and interviews, David Maxwell examines the roles of missionaries and their African collaborators—the Luba-speaking peoples of southeast Katanga—in producing knowledge about Africa.

Through the careful reconstruction of knowledge pathways, Maxwell brings into focus the role of Africans in shaping texts, collections, and images as well as in challenging and adapting Western-imported presuppositions and prejudices. Ultimately, Maxwell illustrates the mutually constitutive nature of discourses of identity in colonial Africa and reveals not only how the Luba shaped missionary research but also how these coproducers of knowledge constructed and critiqued custom and convened new ethnic communities.

Making a significant intervention in the study of both the history of African Christianity and the cultural transformations effected by missionary encounters across the globe, Religious Entanglements excavates the subculture of African Pentecostalism, revealing its potentiality for radical sociocultural change.
AUTHOR BIOGRAPHY
David Maxwell is the Dixie Professor of Ecclesiastical History at the University of Cambridge and a professorial fellow at Emmanuel College in Cambridge.
REVIEWS
“An original and lucid contribution to the study of missionary Christianity in colonial Africa, Religious Entanglements compellingly demonstrates the influence of missionary forms of knowledge on Africanist anthropology, history, art history, and philosophy. Through nuanced, historical, and context-specific research, it also furthers our understanding of the emergence of African ethnicities and African Christianity. With eloquent and precise prose, Maxwell makes a stunning contribution. This is one of the most compelling accounts of mission Christianity and African society in colonial Africa in over two decades.”—David Gordon, Bowdoin College


“An enlightening study of Pentecostal missionary activities in Central Africa from the late 19th to mid-20thcentury. . . Brimming with nuance and acute historical detail, this makes clear that the Luba reception of such missionaries as Burton was an active process of fusion and exchange.”—Publishers Weekly


“Religious Entanglements makes a major contribution to both African studies and the history of missions, thanks to its multiple perspectives, its concern with both contexts and comparisons, its interdisciplinary approach (from anthropology to photography), and its careful distinctions between different group responses to the mission. A most impressive study.”—Peter Burke, Emeritus Professor of Cultural History, University of Cambridge

Introduction
1 Primitivism and Pragmatism in the Making of the Congo Evangelistic Mission
2 Luba Transformations Prior to 1910
3 Continuity and Change in the Luba Christian Movement
4 Missions and the State: The Challenge of Pentecostalism
5 “Acquainting Oneself with the Enemy”: Making Knowledge about Africa
6 Pathways to Knowledge
7 The Creation of Lubaland: Missionary Science and Christian Literacy in the Making of the Luba Katanga
8 Finding God among the Luba: Missionary Conversions and Epiphanies
Postscript: Postcolonial Developments
Conclusion: Pentecostalism, Knowledge Creation, and Religious Change