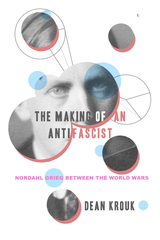 A young imperialist adventurer turned hero of the anti-Nazi resistance, Norwegian journalist, poet, and playwright Nordahl Grieg has become more of a national legend than a real person since his death as a war reporter in Berlin in 1943. A look into Grieg’s intellectual development during the dynamic interwar period sheds light on the political and cultural ideologies that competed in a turbulent Europe. Often portrayed with an emphasis on his humanist and pacifist positions, this antifascist figure becomes more complex in his writings, which reveal shifting allegiances, including an unsavory period as a rigid Stalinist.

In this comprehensive and accessible book, Dean Krouk examines a significant public figure in Scandinavian literature and a critical period in modern European history through original readings of the political, ethical, and gender issues in Grieg’s works. This volume offers a first-rate analysis of the interwar period’s political and cultural agendas in Scandinavia and Europe leading to the Second World War by examining the rise of fascism, communism, and antifascism. Grieg’s poetry found renewed resonance in Norway following the 2011 far-right domestic terrorist attacks, making insight into his contradictory ideas more crucial than ever. Krouk’s presentation of Grieg’s unexpected ideological tensions will be thought-provoking for many readers in the United States and elsewhere.
AUTHOR BIOGRAPHY
Dean Krouk is an associate professor of Scandinavian studies at the University of Wisconsin–Madison. He is the author of Fascism and Modernist Literature in Norway and has published many articles about modern and contemporary Norwegian literature.
REVIEWS
“Krouk displays an impressive knowledge of world affairs and is capable of painting a rich, yet clear background concerning Grieg’s actions, reflections, and publications.”—Monika Žagar, University of Minnesota


“Krouk’s book both nuances and explains Grieg’s position, by interpreting how he deals with the political and historical situation he needs to confront. Simultaneously, Krouk manages to bring out the difficulties of an intellectual person, when facing extreme ideological conflicts such as they developed during the wars.”—Christine Hamm, University of Bergen


"A meticulous and comprehensively researched work of original scholarship that is a highly recommended addition to personal, college and university library collections, The Making of an Antifascist: Nordahl Grieg between the World Wars by Professor Dean Krouk informatively presents a masterpiece of political and literary biography."—Midwest Book Review