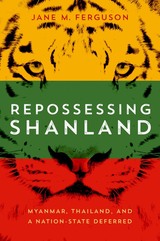 Around five million people across Southeast Asia identify as Shan. Though the Shan people were promised an independent state in the 1947 Union of Burma constitution, successive military governments blocked their liberation. From 1958 onward, insurgency movements, including the Shan United Revolution Army, have fought for independence from Myanmar. Refugees numbering in the hundreds of thousands fled to Thailand to escape the conflict, despite struggling against oppressive citizenship laws there. Several decades of continuous rebellion have created a vacuum in which literati and politicians have constructed a virtual Shan state that lives on in popular media, rock music, and Buddhist ritual.

Based on close readings of Shan-language media and years of ethnographic research in a community of soldiers and their families, Jane M. Ferguson details the origins of these movements and tells the story of the Shan in their own voices. She shows how the Shan have forged a homeland and identity during great upheaval by using state building as an ongoing project of resistance, resilience, and accommodation within both countries. In avoiding a good/bad moral binary and illuminating cultural complexities, Repossessing Shanland offers a fresh perspective on identity formation, transformation, and how people understand and experience borderlands today.
AUTHOR BIOGRAPHY
Jane M. Ferguson is a lecturer in the School of Culture, History and Language at the College of Asia and the Pacific, Australian National University.
REVIEWS
“An outstanding, unique contribution. Vividly recounts the lives of former Shan soldiers, who have managed to survive, preserve, and reconstruct their cultural identities within and along the perimeters set by two neighboring nation-states. Comparative, yet nuanced; informative, yet lively and fun—Repossessing Shanland will appeal to a wide range of audiences.”—Ardeth Thawnghmung, author of Everyday Economic Survival in Myanmar


“A historically thorough and ethnographically thick account. . . . I was captivated by Ferguson’s empathetic writings about the Shan people and their striving for an independent Shanland. She presents attentive analyses to unpack the forces and historical contingencies – and their interrelationships – shaping the repossession project.”—The Review, International Institute for Asian Studies

TABLE OF CONTENTS
Contents
List of Illustrations
Acknowledgments
Prologue: The Tale of the Great Tiger King
Introduction
1. Passport to Ancient Shanland
2. A Cold War Fusion of Elite Ideals with an Armed Insurgency
3. Revolutionary Ink and the Shan Insurgent Culture Industries
4. Shanland during the Reign of the Heroin King
5. Little Brother Is Exploiting You
6. We Are Siamese (If You Please)
7. Rockin’ in the Shan World
8. Future Shan Kings or Ethnic Poster Children
Conclusion: Finding the Shan Nation, Building a Shan State
Notes
References
Index
REQUEST ACCESSIBLE FILE