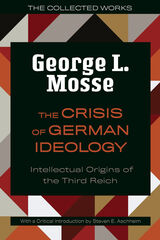 This new edition revisits the renowned historian George L. Mosse’s landmark work exploring the ideological foundations of Nazism in Germany. First published in 1964, this volume was among the first to examine the intellectual origins of the Third Reich. Mosse introduced readers to what is known as the völkisch ideal—the belief that the German people were united through a transcendental essence. This mindset led to the exclusion of Jews and other groups, eventually allowing Nazi leaders to take their beliefs to catastrophic extremes. The critical introduction by Steven E. Aschheim, the author of Beyond the Border: The German-Jewish Legacy Abroad and many other books, brings Mosse’s work into the present moment.


“Mosse takes us back to a vital undercurrent of the German mind. . . . A major contribution to scholarship.”—American Historical Review