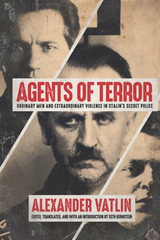 During Stalin's Great Terror, more than a million Soviet citizens were arrested or killed for political crimes they did not commit. Who carried out these purges, and what motivated them? Alexander Vatlin opens up the world of the Soviet perpetrators using detailed evidence from one Moscow suburb. Spurred by ambition or fear, local secret police rushed to fulfill quotas for arresting "enemies of the people"—even when it meant fabricating evidence. Vatlin confronts head-on issues of historical agency and moral responsibility in Stalin-era crimes.
AUTHOR BIOGRAPHY
Alexander Vatlin is a professor of history at Moscow State University. The author of many works in Russian, he is the editor of Piggy Foxy and the Sword of Revolution: Bolshevik Self Portraits. Seth Bernstein is an assistant professor of history at the Higher School of Economics in Moscow.
REVIEWS
"Groundbreaking. In the first detailed description of Stalin's mass terror, Vatlin unfolds the day-to-day working of the Soviet political police who carried out orders to select, arrest, interrogate, and often murder their fellow citizens. An absorbing, heartrending account."—David Shearer, author of Policing Stalin's Socialism —David Shearer, author of Policing Stalin's Socialism


"Only a handful of case studies consider how the purges took place at the grassroots level. One can only hope that Agents of Terror will inspire more research on the purges' perpetrators and victims as well as on the broader sociology of this brutal period." —David Brandenberger, author of Propaganda State in Crisis


"A sensationally significant, detailed microhistory, based on the criminal files of NKVD agents who were arrested as scapegoats at the end of the terror—what some historians have called the purge of the purgers." —Lynne Viola, author of The Unknown Gulag