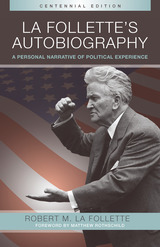 Written in lucid, vigorous prose, La Follette's Autobiography is the famous Wisconsin senator's own account of his political life and philosophy. Both memoir and a history of the Progressive cause in the United States, it charts La Follette's formative years in politics, his attempts to abolish entrenched, ruthless state and corporate influences, and his embattled efforts to advance Progressive policies as Wisconsin governor and U.S. senator. With a new foreword by Matthew Rothschild, editor of The Progressive—the magazine that La Follette himself founded—the Autobiography remains a powerful reminder of the legacies of Progressivism and reform and the enduring voice of the man who fought for them.
AUTHOR BIOGRAPHY
Robert M. La Follette (1855–1925) was a member of the U.S. House of Representatives, served as governor of Wisconsin, and was elected to the U.S. Senate, a position he held from 1906 to 1925. He was a founding father of American Progressivism and ran as the U.S. Progressive Party's presidential candidate in 1924, winning one-sixth of the total national vote.
REVIEWS
"Direct, sarcastic, savage, jutting his powerful jaw at its most defiant angle, banging home his points until his fist sometimes trickled blood, 'Fighting Bob' was something to behold. The essential qualities of the man are all in this blunt, belligerent, rousing autobiography."—Eric F. Goldman, New York Times Book Review


"A political testament of great worth. . . . It was, and remains, a testimonial to democracy by one of its great champions."—John C. Colson, Wisconsin Historical Society

Introduction
I Political Beginnings
II In the House of Representatives
III The Reed Congress and the New National Issues
IV The Crucial Period of My Public Life
V Six Years’ Struggle with the Wisconsin Bosses
VI My First Term as Governor and the Problems I Had to Meet
VII How We Passed the Railroad Taxation Laws
VII Progressive Government Produces Business Prosperity: What Was Accomplished in Wisconsin
IX Alone in the Senate: Experiences with Roosevelt: Railroad Rate Legislation
X Reinforcements: A National Progressive Movement
XI Why I Became a Candidate for the Presidency—Taft’s Unavailability—A Complete History of Roosevelt’s Course after His Return from Africa—Formation of the Organized Progressive Movement—Pressure for a Real Progressive Candidate
XII The True History of the Campaign of 1912 for the Republican Nomination to the Presidency
XIII Why I Continued as a Candidate—Roosevelt Never a Progressive—His Record
Appendix: Speech of Robert M. La Follette Delivered at the Annual Banquet of the Periodical Publishers’ Association
Index