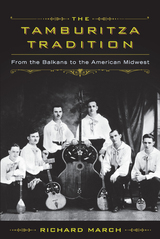 The Tamburitza Tradition is a lively and well-illustrated comprehensive introduction to a Balkan folk music that now also thrives in communities throughout Europe, the Americas, and Australia. Tamburitza features acoustic stringed instruments, ranging in size from tamburas as small as a ukulele to ones as large as a bass viol.
Folklorist Richard March documents the centuries-old origins and development of the tradition, including its intertwining with nationalist and ethnic symbolism. The music survived the complex politics of nineteenth-century Europe but remains a point of contention today. In Croatia, tamburitza is strongly associated with national identity and supported by an artistic and educational infrastructure. Serbia is proud of its outstanding performers and composers who have influenced tamburitza bands on four continents. In the United States, tamburitza was brought by Balkan immigrants in the nineteenth century and has become a flourishing American ethnic music with its own set of representational politics.
Combining historical research with in-depth interviews and extensive participant-observer description, The Tamburitza Tradition reveals a dynamic and expressive music tradition on both sides of the Atlantic and beyond, illuminating the cultures and societies from which it has emerged.
AUTHOR BIOGRAPHY
Richard March was raised in the tamburitza tradition in the Croatian American communities of Chicago and Los Angeles. He was the state folk arts specialist for the Wisconsin Arts Board until retiring and was a longtime host of Wisconsin Public Radio's Down Home Dairyland program.
REVIEWS
"The Tamburitza Tradition is the first English-language monograph on a vibrant but relatively unknown musical tradition. Richard March has a broad and deep knowledge of tamburitza, and he writes with infectious warmth."—Mark Forry, East European Folklife Center


"A landmark contribution documenting a musical heritage that is richly deserving of wider recognition."—Michael Kuharski, director of the Wisconsin Folk Arts Association


“March writes about this subject with the lively immediacy and hands-on knowledge and expertise of an insider. . . . His ethnography is genuinely valuable.”—Slavic Review