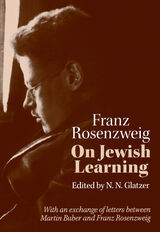 On Jewish Learning
by Franz Rosenzweig
contributions by N.N. Glatzer
University of Wisconsin Press, 2002
Paper: 978-0-299-18234-2
Franz Rosenzweig is one of the greatest contributors to Jewish philosophy in the twentieth century and is, with Martin Buber and Abraham Heschel, one of the Jewish thinkers most widely read by Christians. On Jewish Learning collects essays, speeches, and letters that express Rosenzweig’s desire to reconnect the profound truths of Judaism with the lives of ordinary people. An assimilated Jew and scholar of German philosophy, Rosenzweig was on the point of conversion to Christianity when the experience of a Yom Kippur service in 1913 brought him back to Judaism, and he began to study with philosopher Hermann Cohen. Seeking how to be an observant Jew in the modern world, Rosenzweig refused to characterize the traditions of Jewish law as mere rituals, customs, and folkways. His aim for himself and for others was to find Judaism by living it, and to live it by knowing it more deeply.
The Wisconsin edition is not for sale in the British Commonwealth, the Republic of Ireland, or South Africa.
AUTHOR BIOGRAPHY
Franz Rosenzweig (1886–1929) helped establish Das Freie Jüdische Lehrhaus (Free House of Jewish Learning) in Frankfurt-am-Main. His most influential book is The Star of Redemption, and his German translation, with Martin Buber, of the Bible is considered the finest since Martin Luther’s.
REQUEST ACCESSIBLE FILE