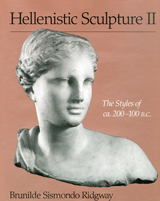 The second century B.C. is one of the most prolific periods in the production of Greek and Hellenistic art, but it is a period extremely vexing to scholars. Very few of the works traditionally cited as examples of this century's art can be dated with certainty, and those that plausibly belong to it reflect no obvious general trends in function, iconography, or style. In Hellenistic Sculpture II: The Styles of ca. 200-100 B.C., the second of Brunilde Sismondo Ridgway's three volumes on Hellenistic sculpture, she takes on the challenge of interpreting and dating the art of this complex and lively century.
During this period, artistic production was stimulated by the encounter between Greece and Rome and fueled by the desire of the kings of Pergamon to emulate the past glories of fifth-century Athens. Statuary in relief and in the round, often at monumental scale, was created in a variety of styles. Ridgway attempts to determine what can be securely considered to have been produced during the second century B.C. In the course of her exploration, she critically scrutinizes most of the best-known pieces of Greek sculpture, ultimately revealing a tentative but plausible picture of the artistic trends of 200–100 B.C.
AUTHOR BIOGRAPHY
Brunilde Sismondo Ridgway is Rhys Carpenter Professor Emerita of Classical and Near Eastern Archaeology at Bryn Mawr College. An authority on Greek sculpture, she has written many books on the subject, including Hellenistic Sculpture I: The Styles of ca. 331–200 B.C., Hellenistic Sculpture III: The Styles of ca. 100–31 B.C., and Fourth-Century Styles in Greek Sculpture, all published by the University of Wisconsin Press. She is the recipient of the Gold Medal for Distinguished Archaeological Achievement from the Archaeological Institute of America.
REVIEWS
"Hellenistic Sculpture II is lucid, accessible even for relative beginners in the field, fully and meticulously documented, well illustrated, and marked throughout with those characteristic insights that mark the work of a true authority. Ridgway leads the reader, step by step, through the labyrinthine arguments of previous scholars, presents new information relevant for a reinterpretation, and then outlines carefully the results, often producing a whole new way of seeing familiar works."—Richard Daniel De Puma, University of Iowa, series editor