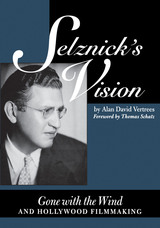 Gone with the Wind has generated interest in every aspect of its production. Yet one crucial aspect has never been fully understood or appreciated—the vital shaping role played by executive producer David O. Selznick.

In this book, Alan David Vertrees challenges the popular image of Selznick as a megalomaniacal meddler whose hiring and firing of directors and screenwriters created a patchwork film that succeeded despite his interference. Drawing on ten years of research in the Selznick archives, and examining the screenplay's successive drafts, dramatic continuity designs and "storyboard" sketches (many of which are reproduced here), and production correspondence and memoranda, Vertrees interprets the producer's actions as manipulation, not indecision, establishing Selznick's "vision" as the guiding intelligence behind the film's success.

In his drive to create a cinematic monument, Selznick also reformed many key facets of studio filmmaking, inventing jobs such as "production designer" (inaugurated by William Cameron Menzies), which persist today. This book thus adds an important chapter to the story of classical Hollywood cinema and the making of the film that has been lauded variously as the "Sistine Chapel of movies" and the "single most beloved entertainment ever produced."