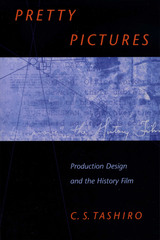 Theories of film have traditionally dealt with either narrative or industrial issues, with the consequence that the physical content of the graphic frame has often been ignored or relegated to the sidelines. By contrast, C. S. Tashiro foregrounds the visual aspect of cinema in this book, drawing on his experiences as a designer and filmmaker, as well as on contemporary theory, to show how production design can support or contradict narrative structure, or exist in an entirely parallel realm of meaning.

Tashiro looks at cinematic production design from a broadly interdisciplinary perspective, encompassing art and architecture theory, audience reception, narrative theory, and phenomenology, to arrive at a more encompassing definition of the process. He builds his argument around studies of several prominent history films, since design is central to historical representation, and explores the most pertinent issues raised by the topic, particularly commodity consumption. In his conclusion, he also offers possible solutions to some of the social problems raised by design.

AUTHOR BIOGRAPHY
Charles Tashiro is an independent film maker and scholar.
REVIEWS
The book is extremely original and demonstrates the author’s deep understanding of many of the theoretical issues related to production design. Tashiro asks all of the hard questions and is not timid about supplying answers. Those answers will certainly stimulate discussion. . . . To my knowledge, no one covers the subject the way Tashiro does.
— Charles Affron