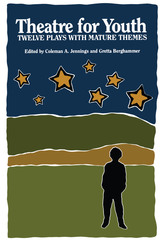 Since the beginning of the theatre-for-youth movement in the United States, the majority of plays written for children have been fairy tales. By the 1960s, however, encouraged by changes in social attitudes toward children, playwrights began to respond to a growing tendency on the parts of both parents and teachers to have children face, rather than avoid, the more difficult truths of existence. Thus children's dramatic literature was opened to new subjects, themes and characters previously considered unsuitable for the young audience.

Theatre for Youth seeks to identify and illustrate this trend by examining twelve plays that deal with mature themes: aging, death and dying, conformity, sexuality, divorce, moral culpability. The plays have been chosen not only for their mature content, but also for their professional integrity, the delicacy with which they handle their subject matter, and their respect for their intended audience.

A foreword by Jed H. Davis, an introduction and summary paragraphs for each play by Jennings and Berghammer, and a lengthy annotated list of suggested plays for further reading or viewing make this volume extremely useful both for directors of children's theatre and for teachers.